The current state of food prices keep high and volatile in international food market in the future may still be repeated. The total number of people suffer hunger is declining, but the elimination of hunger presents imbalance. Not the total global food shortage, but the lack of effective coordination mechanisms could make developing country have more trouble. A key challenge is to make trade on food security and nutrition play a catalytic role, rather than hinder. While trade liberalization can increase the available supply of food importing countries, forcing consumer prices down, but will also bring potential risks. Increased dependence on international markets could lead to short-term market countries more vulnerable to shocks, such as supply, inflation and so on. 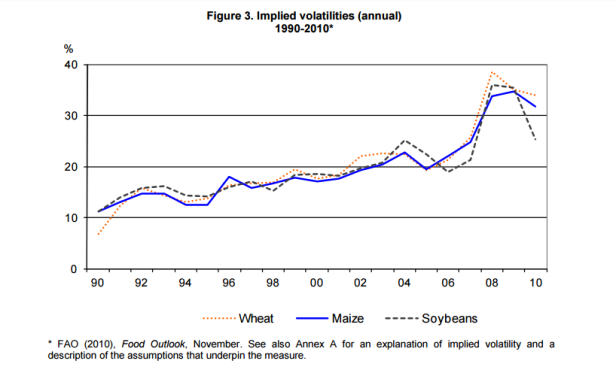 In a market economy, the lack of capital favored by agriculture, often become insufficient investment industry, which makes it stable supply is often fragile. Food reserves decline, exporters, arid crop failure, petroleum fertilizer and pesticides and other agricultural inputs prices, covering factors such as urbanization, industrialization, affect the stable supply of food, breaking the food should have been relatively stable supply and demand balance.

In short term, supply and demand of agricultural products, are relatively stable. It is impossible as other industries, to have explosive growth. Also people primarily need food, in the short term, is an established population, the demand for food, naturally relatively stable. So, the agricultural sector is one of the most difficult expansion. Thus, in the face of capital, agriculture is the most easily overlooked. This is the root causes of the high agricultural subsidies in developed countries as their government try to compensate for market failure.

American model farm, with the United States farmland, less labor, capital adequacy, low energy prices and other basic national conditions, while they are in the colonial expansion and high subsidies two basic political background appears. In addition to Canada, Australia and several political and military background conditions similar countries in the world, no one developed country like the United States has a large farm economy, the implementation of conditions of industrial agriculture. American peasant family farm since 1930, went bankrupt 60%, which is only the result of the government heavily subsidized industrial farms, not their competitive as industrial farms. Many Latin American countries, African countries, including China and other Asian countries, smallholder family farms go bankrupt, but can not receive financial support and employment assistance of their governments. Many policy makers and consultants, will see the success of the US industrial farm surface mode, but then Mexico, Argentina, Africa, and China ignore the fact that the failure of the farm industry.

The victims of the crisis, almost all of the Engel coefficient (the proportion of food consumption accounts for income level) higher civilians, whether developed or developing countries. Unfortunately, the vast majority of poor people concentrated in developing countries, the developed countries are not like their government, as provided in response to rising food prices and food subsidies.

At the same time, this is the root cause of agriculture in developing countries in a tragic outcome, they are unable to compensate for this market failure. On the one hand, they do not recognize the government or the basic law of agriculture, or unable to pay high subsidies; on the other hand, they attack their economies in the face of market and global agricultural trade liberalization, gradually lose autonomy of food supply . Thus, non-profit agriculture, displacement of farmers, rural depressed, is inevitable expansion of capital on a global scale, it is a common phenomenon in developing countries. Many countries in Africa, have been in the food empire to induce and compel the loss of the traditional localized food,  dragged out of the original self-localized food system, which is also depicted as national food production empire needed and consumers. China is also the processes.

One thought on “The Roller coaster food price”