It was painted around 1500, and if you look closely at the story in it, you will find that it is telling the process of the our human world:

The left side of the picture – Adam and Eve are in the garden of Eden, birds fly to the distance, elephants and giraffe and many religious images.

In the middle of the picture – there are some signs of evil in their way of life, there is overpopulation, debauchery and excess.

On the right side of the picture – there is a most terrible situation, the content is distorted, decadent, charred landscape. Like a paradise of decadence and destruction.

Which stage in the picture do you think we are experiencing?

We are in the second stage in my opinion. We’ve seen a lot of extreme weather patterns over the past few decades. Human beings may inadvertently change the climate of the world through the waste of their civilization（1）. We can’t ignore the disaster caused by global warming.

Some experts claimed out that cows are the cause of global warming: In terms of global warming, the greenhouse gas produced by beef production is 13 times as much as that of the same weight of chicken, which is about 57 times the production of potatoes. The beef consumption increased rapidly, it is the results of the growth of population and the per capita meat consumption. The greenhouse gases produced by the production of beef for one American a year, is equivalent to the emissions of a car traveling more than 2900 kilometers.

In a report released in 2006, the United Nations Food and Agriculture Organization (FAO) pointed out that our daily diet, the carbon dioxide, methane, nitrogen oxides and other greenhouse gas emissions caused by meat to the atmosphere, is more than the transportation or industrial (As greenhouse gases absorb solar energy, the surface of the earth becomes hot. The effects of different greenhouse gases are different, and their effects on global warming are usually expressed in terms of carbon dioxide  by equivalent them into the same amount of carbon dioxide)(2).

So, what about eating insects for saving the world? Or just start from changing our climate?

Can Eating Insects Save the World? 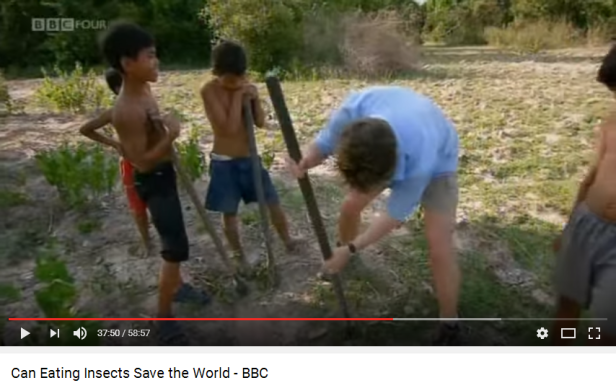 The insect is the largest biological resources on earth which has not been fully made used of, the development and utilization of insect resources will become a hot spot in the area of entomological research in the twenty-first Century. Rational use of insect food is one of the effective ways to improve the nutrition level and the shortage of food, as well as to solve the problem of population expansion and to improve the nutrition structure of people’s diet. It will also have benefits on improving people’s physical condition and maintaining the ecological balance. At present, the research related to the development of insect food technology is weak, and there is no unified mechanism for effective coordination and management to regulate and control management, coupled with the limitation of people’s concept on diet, leading to the extremely low level of industrialization of the development of insect food. To make the insect food a real industry, it is needed to set up the mechanism for insect food research and insect feeding plant, which should be responsible for edible insect research, breeding, processing and sales development. Propaganda and demonstration should be carried out to change people’s traditional concept of diet and eating habits on insect food, making insect food a real industry as soon as possible.

Insects are the largest and most diverse group of organisms on earth. There are about 1.8 million known species of insects on earth, and it is estimated that the actual insect species is 5-8 times the known species, which means there are 10 million species of insects on earth. Most people treat insects as pests, they cause agricultural reduction and forest destruction, affecting human food sources and endangering the ecological environment for human survival. However, insects are closely related to the human society. Insects are a valuable resource for human beings. They have made great contributions to mankind. For example, bee do better at pollination to vegetables and other crops than people which is beneficial for labor saving, helping farmers out of poverty.

China is one of the oldest countries in the use of edible insects. According to records, China has more than 3000 years’ history in the use of existing insects. When it comes to eating insects, people in Yunnan Multiple Ethnic regions in China are familiar with eating different kinds of insects. Such as Jinghong termites and small wasp, dendrolimus kikuchii matsumura and Jianshui bamboo worms etc, all these edible insects can be seen in most big restaurants. Their high protein are loved by some people. According to scientific measurement, insect protein content is usually higher than poultry, eggs, fish, meat, and rich in minerals and trace elements. For example, the protein content of ants is 42% to 67%, predacious diving beetle is 75%, butterfly is 71%, maggot is 66%, bee is 43%, which are obviously higher than that of beef (21.5%), chicken (20%), and fish (18.9%), pork (18.5%) and eggs (6.4%) protein content, so insects can definitely be used as substitution for meat.

The low fat content of insect and easily absorbed protein by the human body can make insect a preferred food for weight loss people. And insect has a full range and reasonable collocation of amino acids, its vitamins, mineral elements (such as copper, iron, zinc, selenium, germanium, etc.) and bioactive substances content is higher, its structure is more reasonable than livestock nutrition. Although the development and utilization of insect food can broaden the protein resources and improve people’s dietary nutrition structure, the majority of edible insects can not reproduce artificially at present, such as clanis bilineata, cicadas, grasshoppers, most edible insects are from natural instead of farmed.

The cooking method is very simple, basically is directly (or soak 1-2 days) fried, steamed, or boiled insects before eating. But these kind of natural insects often carry many parasites and pathogens, food made of them may have hidden danger on human health and life safety.

In addition, a large number of pesticides are frequently used, which may have high toxicity and long residual effect. Insect resistance is more and more strong, so more and more residues are accumulated in insects, food processed with this natural material can easily lead to acute and chronic poisoning, greatly increased the incidence of food and cancer, deformity, etc., and even cause the death of food poisoning.

With the continuous improvement of people’s living standards, people’s consumption concept has undergone a fundamental changed from eating wild and natural food to eating strange and nutritious food. Lots of research showed that, silkworm not only contains a large number of human useful chitin, antimicrobial peptide defensins and lectins, also contains nine kinds of amino acids and proteins, free amino acids, vitamins, minerals, unsaturated fatty acids and other nutrients, which is consistent with the normal protein proportion of the human body and can be easily absorbed and utilized. Insect food will be a full nutrition food for human being in twenty-first Century, which can provide abundant protein and amino acid for human body, and has a good development and utilization value. Hope insect food can cause the attention of the scientific community and benefit mankind.