When we think of hunger we sometimes instantaneously think of areas in the world where there is obvious poverty and hardship. We think of the global south and a place across the pond, not the people next door to us or across the street. Such prejudices and ways of thinking about hunger can be aided by institutions that put forth humanitarian aid and laws regarding poverty. An example of this is The Right to food.

The ‘Right to Food’ was established under International Law as a Human Right and later integrated into the International Covenant on Economic, Social and cultural rights. The Right to Food is achieved when ‘when every man, woman and child, alone or in community with others, has physical and economic access at all times to adequate food or means for its procurement’ (OHCHR). One may deem this simply a Human right for those insecure in the world. However, The Right to Food can be also seen as having colonial tendencies. This can be seen through the colonial legacy of food and the use of western institutions. 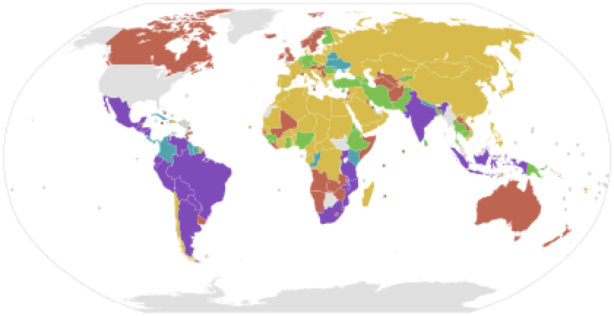 One must ask if it is a human right issue surely every country should adopt The Right to Food? In figure 1 we can identify that those who adopted the right to food in framework law are predominantly in South America and Africa (Global south). The segregation of the global south and the global north likens to the colonial theory of Orientalism. This theory explores and details how the world is essentially composed of two opposing poles.

Figure 1 also emphasises the notion there is there is no need for The Right to Food in the global north. Though this is not true, for there are people who encounter food poverty and food insecurity in the global north. If we take the example of America who in 2009 joined the non-binding Right to food though did not change customary international laws, therefore not explicitly guaranteeing the right to food. It was reported that in 2015 ‘59% of food insecure households had participated in federal food and nutrition assistance programmes (Coleman-Jensen: 2016, 2). This demonstrates a restricted access to food and goes against the premises of the Right to Food.

Although still using federal food and nutrition assistance programmes as an example, the existence of them shows access to food despite the circumstances. In developing countries and more specifically countries part of the right to food there may not be food banks and thus access too any food. With this in mind the right to food may simply be a human right for those in need.

Food was symbolic for the European coloniser and used as a great instrument in colonisation. It was here that the introduction of ‘right foods’ and ‘wrong foods’ were established.  It was taught that European foods such as bread and meat were right and the indigenous foods such as yams were wrong. Christopher Columbus believed that Spanish Food was imperative to one’s health and survival. This was taught to the indigenous therefore using food knowledge and education as a tool for colonialism. One can acknowledge the link between colonial education and todays The Right to Food.

Though The Right to Food doesn’t specify what foods are good and what are bad, the language used can somewhat seem instructive. In many of The Right to Foods variations and definitions the word ‘adequate’ is used.  One can ask what is adequate food? Is this open to interpretation? This like colonialism identifies the wrong and right foods.

Though what may seem like the United Nations enforcing its western laws on non-western countries, one can still deem The Right to Food to be culturally sensitive. Despite the same definition for all, countries have used their own interpretation in their constitutions. For example, Colombia uses the term ‘balanced diet’. The change of definitions and language used, demonstrates a culturally subjective interpretation.

In order to dispel of these colonial tendencies and for the right to food to be unequivocally a human right there are several changes that can be made.  First acknowledging that a human right belongs to every single person. This can be done if every country participates. Yes i’m looking at you America! Every corner of the earth has people who don’t have access to food and therefore need this Human right in place. Second, acknowledge indigenous foods more clearly in definition and variations of the right, in order to dispel the colonial practice of right and wrong foods.