“Food-security exists when all people, at all times, have physical, social and economic access to sufficient, safe and nutritious food which meets their dietary needs and food preferences for an active and healthy life.” [2]

Despite media perpetually presenting ‘food-aid’ in Britain through the Trussell Trust Food-Bank model, it encompasses more than this including: independent food-banks, social-eating, Langars. Although not widely focused on in the literature these provisions are a mix of faith-based and secular support. Laurie argues there must be greater recognition of the role religion plays in shaping societies. [3]

Religion refers to the community of people who share similar beliefs, and who work together to support those beliefs, which are codifyed into sacred texts. [4]

There is some consideration in literature of the role of religion, in the food-insecurity landscape, but this is framed around Christianity and the Food-Bank. For example, Singh’s research in Bradford which recognised in relation to Christian food-banks there were few Pakistani/ Muslim individuals using the service. [5]

However, this blog-post will focus on the Langar, considering if religion creates a barrier to accessing the Langar’s services? (and consequently restricts individuals gaining food-security through this provision.)

It will argue although certain practices are expected, due to religion (such as head-covering), practices are predominantly focused on achieving equality, and allowing all who need to access the meal the Langar provides. There is some evidence of alteration of the concept (e.g. taking Langar out of the Gurdwara) to increase accessibility and inclusion to the service. 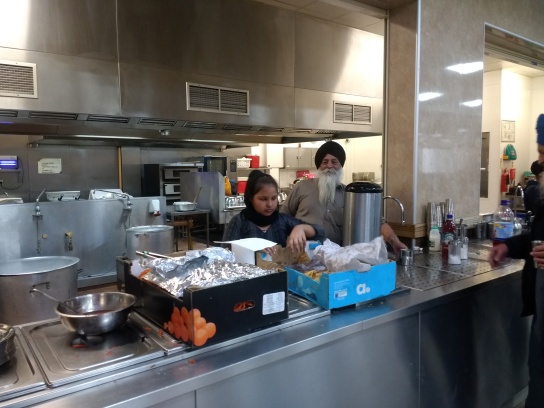 Langar is part of the Gurdwara and part of ‘SEVA’ (service) – where practicing Sikhs must altruistically complete selfless service, by sharing one’s time and wealth to support those ‘in need’ (including but not exclusively to food-insecure individuals) (6). The Langar is the space in the Gurdwarda where individuals can share a vegetarian meal, typically from 6am-8pm! Sikhs do not describe Langar as charity but as a means of ‘serving’ the community (not just the Sikh diaspora) Sikh’s provide time and money for the Langar’s operation- which is designed to be a social support system that promotes humility and demotes egoism. (7)

Around 5000 meals are now served to non-Sikh’s by Britain’s 250 Gurdwaras each week. Something also recognised by the President of the Gurdwara I visited. The increasing uptake of this service, means it’s increasingly important to understand the intersections between religion and food-in/security. If more people are relying on such provisions are they inclusionary (despite religion)? [8]

But, is religion a barrier to the Langar achieving its aims of ‘providing a meal to all ‘in need’? (and providing some degree of food-security?)

Lefebrve [9] argues space is socially constituted (materially and embodied), affecting experience and participation in space. Expected social practices govern behaviour in space, including religious practice. [10] Pettersson [11] suggest if social practices are overtly religious people feel uncomfortable (and won’t enter/ participate in a space), if they are not familiar with expectations.

Therefore, in relation to the Langar, it could be argued because there is an expectation to adopt certain practices to enter the space, those who could benefit from its service are potentially excluded.

But aren’t all spaces’ accessibility shaped by social practices? such as a drunk individual being excluded from a Restaurant? Or a women having to wear heels to enter a nightclub?

Rather this provision and support exist because of religion and the principles of Sikhism? But that does not mean it’s exclusionary to some individuals…

Following those practices are the only expectations of entering the Langar and signs clearly display this in English and Punjab, see below.

With the exception of the prayer hall (which you are not obliged to visit, but welcome if you wish) the space felt Utilitarian- adverts for weightwatchers not religious events!

Talk of religion is not encouraged in the Langar- it’s a place to eat and share a communal meal, a social practice integral to the space, beyond religion. (The benefits of commensuality are vast) [14] Importantly it’s a meal, not food! “Not a simple consumable object…[but] source of nourishment for the body and soul” [15]Additionally all individuals (bar elderly/infirm) sit at an equal level on the floor (as shown in the photograph), regardless of their identity, limiting the extent of a hierachical provision Caraher suggests can be evident. [16] 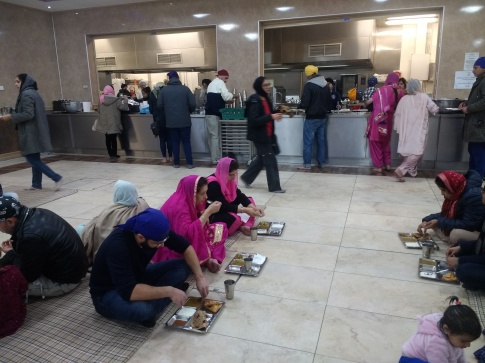 Individuals are given choice of homecooked meals. The Gurdwara I visited has recently introduced ‘western’ options on a Saturday rather than solely traditional punjabi food. For example serving pizza and chips (see below), to ensure familiarity of food for all visitors and a diversity of food options. 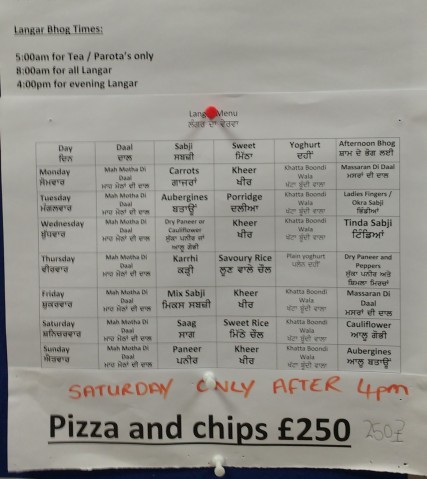 Evidence of acculturation, and inclusion of more familiar foods, are important in feeling welcome and included in a space. [18] There is no referral system, therefore if an individual feels welcome, they are more likely to return and engage with the space, potentially alleviating food-insecurity in the long-term.

On recognition crossing ‘the threshold’ into the physical space of the Langar may exclude some food-insecure individuals, as some express feeling uncomfortable in the unfamiliar space. Some Gurdwara’s have taken the services of the Langar out of their door- serving food on the street. [19]

(All photos were taken with permission)