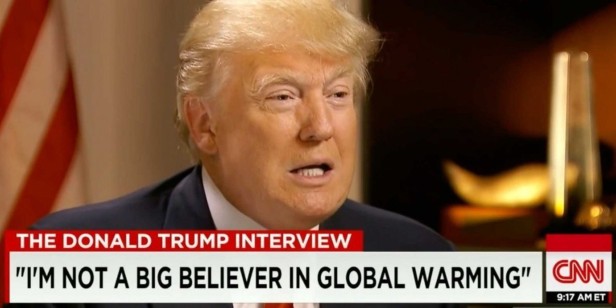 Although we are now really familiar with the word of global warming, Donald Trump seems totally not agree with this. He said that the concept of global warming was created by and for the Chinese in order to make U.S. manufacturing non-competitive[1].He did call climate change a Chinese hoax[2]. 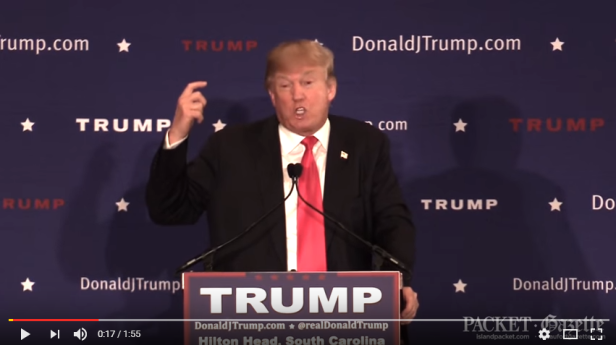 It is reported that 30000 scientists agreed with him[3]. One of the experts, John Coleman[4], who is the founder of the weather channel, warned that huge wealth is being made by climate change supporters such as Al Gore[5]. Al Gore is considered to be unbelievable because when he started his climate change movement, his private plane was flying around the world. Owe to the investment on the fake “green technology” company, and the misappropriation (corruption) of a large number of donations and loans, his wealth grew from $2 million in 2001 to $100 million in 2016[6].

Then, is there any scientific basis for Trump’s comments about “global warming”?

However, 97 percent of climate scientists have achieved the agreement that our earth is becoming warmer due to the burning of fuel and many other human activities[8].

In the late 90s and early 1980s, some scientists found that in the second half of the twentieth Century, the global warming trend was “very clear”, and human’s modern lifestyle attributed to the climate change.

In June 1988, James Hansen, an US climate scientist, said at a Senate hearing that there was 99% possibility that the greenhouse gas emissions from human activities led to the greenhouse effect, and specific actions should be taken urgently[9].

In December of the same year, the United Nations General Assembly adopted a resolution, stressed that climate change is a human “problem” of common concern, and contributed to the establishment of IPCC  (Intergovernmental Panel on Climate Change), making “climate warming” a widely influential topic in international politics. Since then, the scientific research has been gradually known to the public.

Global warming is invisible and not easy to be perceived, it has been forwarded in controversy and doubt since appearance. Some people believe that global warming is a natural law of the earth, and has nothing to do with mankind. Some people think that the global climate is not warming but cold. Especially after some continuous occurring of large-scale cold events, the theory of “global cooling” is more convinced. For example, in 2012, a wide range of extremely cold weather occurred in Eurasia, then some international climate experts pointed out that the Eurasian arctic weather is just the beginning of global cooling, the cold may last for 20 to 30 years, and it was even claimed by some media that the earth’s Little Ice Age may have come. And in 2013, the cold summer in Arctic led to the rapid expansion of the iced area in Eurasia, it increased by 60% compared with 2012 which was more than 1 million square miles. Then some scientists warned again that the world is experiencing a rapid decline in temperatures, and human could face global cooling. Similarly, the extreme cold weather in 2014 and the super cold in 2015 all lead to some people’s doubts about global warming.

All these events happened above can be really good evidence to against the global warming supporters. And most of Trump’s objections to climate warming were all raised at the time of such “cold” and “ice storm” events.

But in fact, the climate warming which we are saying is concerned about a long-term trend of the last hundred years and the global average situation, instead of the inter annual variation. From this point of view, we cannot judge whether global is warming or cooling just according to a period of local extreme warm or cold event.

First of all, take temperature as an example. According to the 2014 release of the IPCC Fifth Scientific Assessment Report,over the past 130 years, the average temperature of global surface is always in the growth trend, and has grown up to 0.85 degrees Celsius, 1983 – 2012 is the hottest in the past 1400 years 30 years. 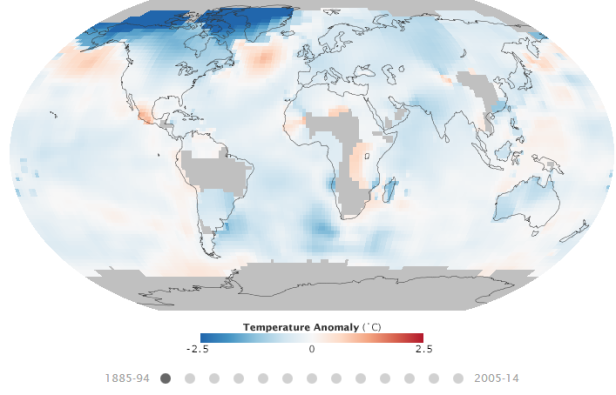 From this year’s observation, the average temperature of both land and ocean surface are the warmest from January to February in 2016 since recording. Between 1971 and 2010, more than 90% of the net energy added to the climate system is stored in the ocean, resulting in a warming of the upper layer of the ocean. Since 1971, global glacial retreating appeared commonly, the ice sheet storage of Greenland and the Antarctic was reducing, the Arctic sea ice area was shrinking at the rate of 3.5% – 4.1% in every ten years. In September 2016, the Arctic sea ice area was 27.8% less than that of the 1981-2010 in average, and the Antarctic sea ice extent was 2% less than that of the 1981-2010 in average. Since twentieth Century, the global sea level has risen 19 cm, an average increase of 1.7 mm annually[10][11].

Since the era of industrialization, under the pressure of economic and population growth, uncontrolled human combustion of fossil fuels makes greenhouse gas emissions increased sharply, resulting in the highest concentration of greenhouse gas in the past 800 thousand years, which includes carbon dioxide, methane, Nitrous Oxide and other atmospheric greenhouse gas[12]. IPCC comprehensive report pointed out that the climate change are mainly influenced by human activities because of their emission of greenhouse gases, more than half of the global warming is caused by human activities since the mid twentieth Century[13]. The credibility of this report is over 95%. 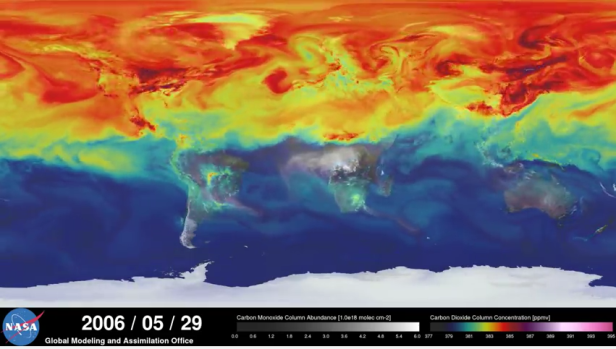 Vedio source: NASA | A Year in the Life of Earth’s CO2

The 2011-2015 global climate report released by the World Meteorological Organization of the United Nations also pointed out that with the global temperature record, the sea level is rising, the Arctic sea ice, glacier, and the Northern Hemisphere Snow covered area is shrinking. All these climate change indicators have confirmed the fact that greenhouse gases are causing the long-term warming trend. The report claimed that the concentration of carbon dioxide in the atmosphere reached a record of 400ppm for the first time in 2015, that is to say in each of the 1 million molecules of the air, there are 400 molecules of carbon dioxide, which is an important threshold, because humans have never seen such a high concentration of atmospheric greenhouse gas in the atmosphere. It is about 5 million to 3 million years ago at the Pliocene when the earth carbon dioxide concentration was more than 400ppm[14].

Thus, the above scientific data and facts have provided a strong evidence for global warming. In addition to the scientific community, global warming has become the consensus of most countries in the world. In December 12th of last year, nearly 200 parties of the United Nations Framework Convention on Climate Change (UNFCCC)  jointly reached a new global climate agreement — Paris agreement, the parties will strengthen the global response to the threat of climate change. 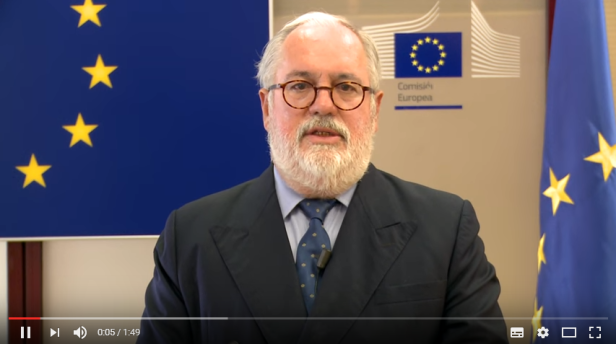