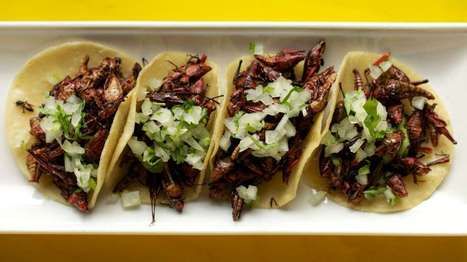 Can you image that insects can be made delicious tacos like the picture shows? As the biggest animal group on earth, insects take up more than 80% of the animal kingdom with over a million species. And “the single class of insecta has more species than all the species of all other classes of animals combined.” (Tabassum-Abbasi et al,2015). Thus, there are wider choices of edible insect species. And based on several estimates, more than 2,000 species of insects have been found suitable for human eating. In order to promote edible insects, some chefs create dishes of insects’ cuisine. A lot of guests are attracted to join in and have a taste. (Video: East meets West through edible insects https://www.facebook.com/globalbugsasia/videos/334294040283017/ )

Do you want to try these cuisines of insects after watching the video?

Some of people probably still do not like to try because they think that insects are dirty, harmful or inspire fear. They also have their doubts: Why eating insects are better than other livestock, like chicken and mammals? Why insects will become the future of food?

Most of people hold a common viewpoint that insects reared at ‘dirty’ and open space and raised without quality control. Hence, insect flesh from the wild is unlikely to be cleaner than the flesh of the conventional livestock. While, Tabassum-Abbasi et al (2015) claim that a lot of insect species are herbivores who are fed by a few species of plants and dwell in unpolluted habitats. For example, the grasshopper is one of the cleanest of insects because they have exclusively plant-based feed (Holt, 1988). A large amount of insects consume only one or a few species of plants. Therefore, it is easier to control their feed’s quality and guarantee the flesh of insects cleaner than some of livestock like chicken.

Insect is a significant nutritional resource for humans because their bodies are rich in nutrients, such as protein, amino acids, fat, vitamins and trace elements.

Insect bodies are rich in protein. Tabassum-Abbasi et al (2015) come out some results through analyzing several reports which assayed 249 species of edible insects for their nutritive value. And they found out 83% of insects have protein content higher than 40% of their body weight, and 43% have protein content over 60% of their body weight. Also, over 20 types of amino acid are contained in protein that are beneficial to the human body. Durst, P.B. (2010) comes out that edible insects have 10-30% necessary amino acid which covering 35-50% of all types of amino acids.

In addition, many edible insects are rich in fat. Fat is a valuable component part of the human body. It can store and supply energy, also support and protect organs. As well, unsaturated fatty acids, found in fat, are good for human growth and protect the skin. Durst, P.B. (2010) shows edible insects include between 10% and 50% of fat content and the amount of fatty acid is higher than other animal fat.

Now, let us compare the nutritive value between beef and grasshopper. According the picture below, it is clear that compare results of each important elements. In per 100 grams ground beef and grasshopper, grasshopper has half less calories than the same quantity of beef. And both of them have similar quantity of protein and iron. 100 grams of beef contain 18g of fats which is 3 times more than grasshopper’s but it only has 1/3 time calcium than grasshopper. Therefore, edible insects have equal value or more with beef.

First of all, compare with conventional livestock, less resources will be used by raising insects, such as land or space, water resources and feed productions. Reproducing and raring Insects can be happened in much smaller spaces than conventional livestock, for instance cattle, pigs and chickens. Oonincx and de Boer (2012) found that for producing the equal quantity of mealworm protein in one hectare of land, 2.5,2-3.5 and 10 hectares needed for milk, pork/chicken and beef protein respectively. And cows need 10 times more land than crickets per unit weight. Consequently, the land/space needed to rear edible insects is considerably lesser than the land area required for livestock.

Secondly, according to Oonincx et al (2010), insects has a higher growth rate and emitted lower amounts of greenhouse gas and NH3 than conventional livestock. For example, mealworms produce at least 14 times less greenhouse gas emissions than cows. And crickets create 1% of the methane produced by cattle to produce the same amount of protein. Thus, reproducing and raising edible insects is good for atmosphere and reduce the degree of global warming.

The future of food

It is a trend that edible insects will become the future of food, because 80% of nations – over two billion people worldwide – eat insects in different ways. “With the growing world population, the demand for animal protein is predicted to increase by 75% between now and 2050, and insects are promising candidates as an alternative sustainable food source.” (www.food.gov.uk). Insects are rich in nutrients, like protein, fat and trace elements, which can meet needs of the human body. And edible insects can be rapidly reproduced and reared as well as it is easier to harvest by controlling their feeds in habitat. Raising insects consumes less resources and emits lower amount of greenhouse gases than conventional livestock, which benefit to save natural resources and protect atmosphere environment. Above all, a series of popular food made by edible insects are likely just around the corner. Simultaneously, a growing number of people would like to accept and enjoy insect food as well as try to cook dishes of insects by themselves.