As foodstuffs go, bacon can be an emotive one. Equally at home sandwiched between soft bread or sizzling alongside sunshine-yolked eggs, many of us will have heard a variation on the phrase, “I reckon I could be vegetarian, if it wasn’t for the smell of bacon!”. The unique joy of food aromas, tastes and textures often makes it difficult to adopt diets that we know would be healthier for ourselves and for the planet. Public awareness is growing that cutting down on meat consumption can be a central tool for reducing agriculture’s impact on the environment, and there is little doubt that a lot of folk in the industrialised world could do with reducing their meat intake, obtaining as they do more than enough protein in their diet. But for a growing number of people living in transitioning economies such as China, rising incomes now mean they can afford for the first time to introduce greater amounts of meat into their eating habits, enriching their diets with iron and protein, and enjoying the social status that comes with it. In these contexts, to argue for a wholesale reduction in livestock farming could be said to be unrealistic, and well – pig-headed. 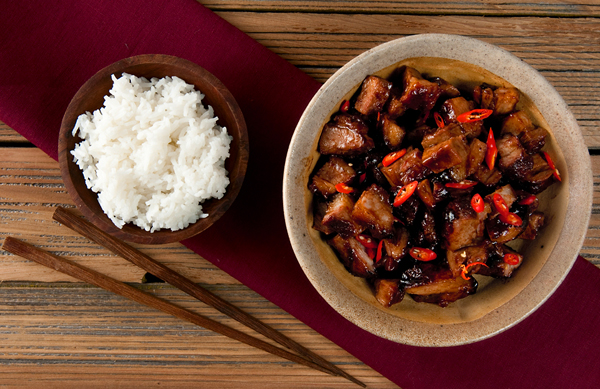 So what can we consider as a second-best option? Sticking with pigs (pork being the favoured meat in much of East Asia), there might well be an environmentally attractive way forward. Currently, most industrial pig production across the world relies on feed derived from grain or soybeans. Although produced and formulated especially for pigs to achieve the most efficient conversion of feed to meat, demand for these formulas nonetheless drives land use change and deforestation in the Amazon, where farmers face strong financial incentives to sacrifice the richly biodiverse terrain in exchange for lucrative soybean plantations. This is clearly far from being ideal.

Yet there is another way: a select few pig production systems (in Japan, South Korea and Taiwan) have established a way of feeding their pigs that calls for far less commercial feed than the typical system in Europe or the USA. The technique itself may not sound so unfamiliar: these pigs are essentially fed kitchen scraps. This goes hand-in-hand with the idyllic image of backyard pig-rearing, where gleefully muddy hogs come gambolling up to a housewife with a bucket full of carrot peelings, apple cores and hardened crusts. Indeed, traditional pig rearing often reflected pigs’ natural omnivorous tendencies and the animals were fed primarily on swill, a mixture of solid and liquid kitchen scraps.

The adoption of swill-feeding on an industrial scale, however, has had a chequered history. It was banned as a practice in the EU in 2002 on the back of both concerns over transmissible spongiform encephalopathy (TSE), a disease that can spread from farm animals to humans, and after the 2001 outbreak of foot and mouth disease in the United Kingdom was traced to a Northumberland farm using unprocessed swill as feed. The legacy of this is that currently, only waste streams with the absolutely strictest separation from any remnants of animal product may be redirected into animal feed: even vegetarian restaurants are excluded from sending their waste to be used. However, the experience of the countries mentioned above demonstrates that, when treated correctly, even food waste including traces of animal protein can be safely transformed into feed for pigs, in the process reducing the volume of waste that is sent to landfill and decreasing the demand for commercial feed based on soy and grain.

One successful example is Japan’s ‘Ecofeed’ production, which runs under a centralised system. Registered processors are given authorisation to heat-treat waste obtained from the food processing, food retail and catering industries, which would otherwise go on to be incinerated or buried. Certified processors are then able to sell this on to pig and poultry farmers as feed, and the resulting meat is marketed as ‘Ecopork’. In Taiwan, food scraps are also collected from households, achieving yet further efficiencies in waste management. Challenges do exist – for example, raw waste is sometimes contaminated with metals or dangerous chemical products – but the centralised, controlled handling of the waste under these regulated schemes ensures that all feed reaches an appropriate standard. By legalising and standardising the use of swill, these countries have made it possible to trace problems if they do happen to arise, in contrast with countries such as Australia where swill feeding continues illegally and outside the control of regulatory bodies. 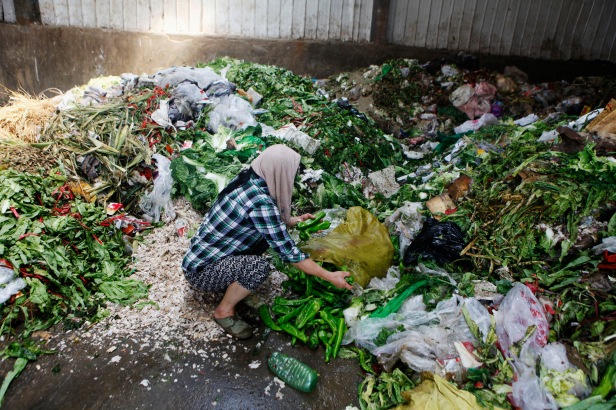 In order for the adoption of ‘ecofeed’ to be successful, it must provide a commercially viable alternative for pig farmers, not just in terms of price but in how consistently nutritious it is and how efficiently pigs grow whilst being fed on it. Since commercial feed can comprise up to 75% of the cost of rearing pigs, ecofeed is well-placed as a competitive alternative, even if pigs reared on it take slightly longer to reach slaughter weight (savings on feed make up for the additional labour and housing costs). In a place such as mainland China, where pig agriculture is moving increasingly towards industrialised, peri-urban production, there is great scope for instituting a system similar to those in Japan and South Korea, ‘locking in’ efficiencies to pork production and avoiding producers becoming reliant on commercial feed, which, aside from being environmentally damaging, is vulnerable to price swings. Double-blind tests suggest that consumers cannot distinguish between typical commercial pork and ecopork, another reassurance to farmers who might be worried about the quality of the meat they devotedly raise.

A system such as this would require strong commitment from a government willing to devote the necessary resources to industry regulation, but in a nation with a serious waste management problem and middle class mouths to feed, perhaps it is time to wake up and smell the bacon?