Household food waste is a sustainability challenge and also a threat to food security. Wasting food is indeed a huge “luxury” in a world where resources are finite and one in every nine people is hungry. The greenhouse gases released by food waste decomposing in landfill and throughout of its production is costing the world $411 billion worth of damage. All of the resources that went into growing, producing, processing, and transporting that food are also wasted, causing further negative environmental impacts for reasons that could have been avoided.

The problem of household food waste seems to have a lot more to do with the developed world than its less developed counterparts. On average, consumers in higher-income countries waste a lot more of the food that they bought, as compared to those in developing countries[1][2][3] (see graphs below). Of course there are vast differences between people in the same country, but it is estimated that over 7.3 million tonnes of food was wasted in the UK in 2015, of which 60% was actually avoidable.

“In the developed world, food is more abundant but it costs much less. In a sense people don’t value food for what it represents.”

This may sound like blaming the consumer, In developing countries where people often have to spend a large share of their income e.g. 30-50% on food (see graph below), they don’t exactly have the option to waste their hard-earn food. 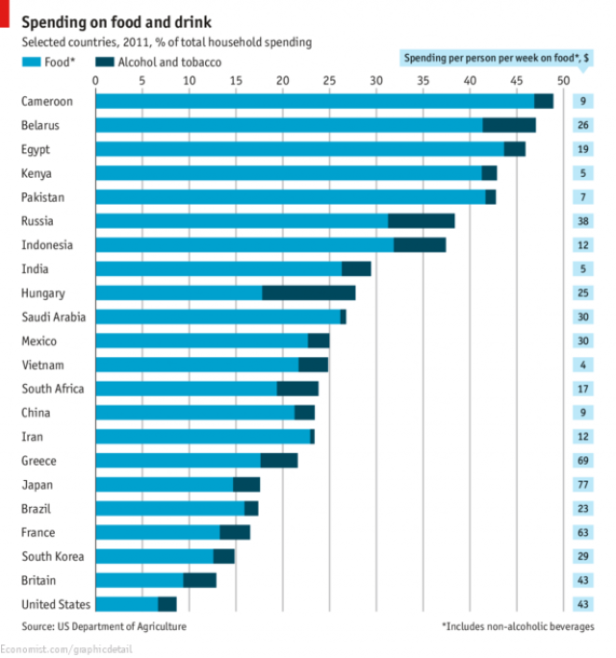 WHY, THEN, DO CONSUMERS WASTE SO MUCH FOOD?

Despite the often reported “anxieties” and “guilt”, food wasting has become an ordinary, necessary even, part of domestic food practices[4][5][6][7][8].

A study back in 2007 by WRAP on consumers’ attitudes revealed that only 13% of consumers were particularly concerned by food waste and would take efforts to avoid throwing food away, whilst others were either passively concerned or entirely “disconnected” from the issue and don’t even bother to take any action to reduce food waste. Among those bothered by food waste, environmental concern is secondary at best as people would rather value their own time and money[9]. They also tended to believe that since food waste is biodegradable, it is even less of an environment issue than packaging waste.

Such indifference attitude may continue to exist as long as consumers in richer countries can “simply afford to waste food”[10]. The abundance of food, numerous choices of brand and relatively cheap food costs, together with supermarkets’ sale strategies make consumers buy more food than they actually need, only to waste them once they get home[11].

As the supply chain now separates the food production and preparation from the consumption stage, it creates a “disconnection from food”[12][13]. Certain countries such as the U.S. or Australia are considered to have a “weak” food culture, placing little value on food and thus wasting more food than those with deeper food cultures and greater appreciation for food[14][15]. Those with hands-on experience in the process of growing and turning plants or animals into food have a stronger connection to it than those who only come into contact with food at supermarket shelves or on their restaurant tables, and thus much less likely to waste such food[16]. Similarly, older generations wasted much less food than the rest of the population because they may have experienced austerity or food rationing during the war and thus developed a strong feeling against wasting food[17].

Some consumers cite food safety concern as the reason why they waste food[18][19][20]. They rely strictly on external standards such as “Best before” date labels on the packaging and discard food without double-checking the food’s actual appearance or smell, thinking that such food is no longer safe to eat[21]. Not only so, many consumers confuse between different date labels “Sell by”, “Use by”, and “Display until” and throw food away although they may still be “perfectly good” to eat[22][23][24][25][26]. However, why would they even have close-to-expiry food to waste if they didn’t buy too much? Wouldn’t it an issue of poor food planning and management skills rather than food safety concerns? 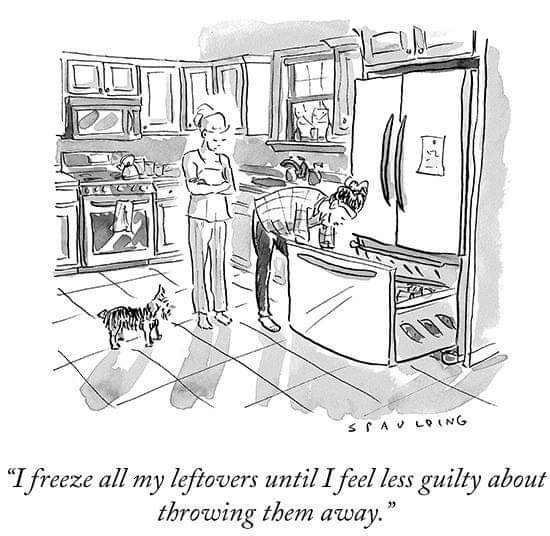 Also, the majority of respondents in a study reported that they just leave the unwanted food in a corner to decay and procrastinate until the food become “undeniably inedible” to throw them away[27]. Procrastination allows them to ease the feeling of anxiety and guilt associated with wasting food[28]. Accordingly, food “not being used in time” results in more than half of food waste in the UK.

For more examples of unwise food practices that lead to food waste, please see table below:

ANYTHING WE CAN DO ABOUT IT?

There are a number of solutions aimed to help consumers (especially in the developed world) become more responsible in reducing food waste:

Or, if all else fails,  maybe the cockroaches can help us this time? =)